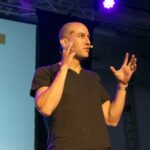 This year, it might be smart to do a little bit less than you normally would. Can you actually make your company better and more valuable by doing less, though? The answer is yes! This week’s guest is a master of tackling overwhelm and simplifying your life.

Ari Meisel is the best-selling author of The Art Of Less Doing: One Entrepreneur’s Formula for a Beautiful Life, and The Replaceable Founder. He is a self-described ‘overwhelmologist’ whose insights into personal and professional productivity have earned him the title of ‘The Guru’s Guru.’

Ari used to work really unhealthy 18-hour days and after three years of doing this, he found himself in $3 million worth of personal debt. He was also diagnosed with Crohn’s Disease, which made his productivity struggle. He couldn’t even get one hour of work done a day. He had to find alternatives and he had to do it quickly.

Ari worked diligently on how to incorporate automation, business optimization, and team structures into his business so that he could maximize his time based on what he could physically do. Through these productivity discoveries, Ari created Less Doing, to help coach clients on doing the same.

Now, he helps clients replace themselves as a CEO or Founder. Entrepreneurs often think, ‘If I could only find someone who was just like me.’ But, we all know that’s nearly impossible to do. Though, not all hope is lost if you’re feeling overwhelmed and like you’re working two full-time jobs in your business. Ari stresses the importance of conscious project management, outsourcing, and automation to make your life easier.